Palestine is a relatively small country in terms of its total terrority contrariwise to the crucial role it has played in the ancient and modern history of the Middle East, including the prophecy period of Jesus Christ in Palestine. The history of Palestine has been marked by frequent political conflict and violent land seizures because of its importance to several major world religions, and because Palestine sits at a valuable geographic crossroads between Africa and Asia. Today, Arab people who call this territory home are known as Palestinians, and the people of Palestine have a strong desire to create a free and independent state in this contested region of the world.

The decades-old Israel-Palestine conflict is in the international spotlight once again, after Israel initiated an operation of kicking Palestinian residents of “Sheikh Jarrah” neighborhood out of their lawful homes forcefully, in order to replace them with Israeli settlers, violating several human rights and international laws in the process. This process begun during the holy month of Ramadan, corresponding to late April 2021; Palestinian people faced these crimes through several peaceful strikes and marches near Masjid Al Aqsa mosque, protestors were faced with brutality and the violation and attack on the holy mosque which is one of the most symbolic Islamic pilars in the world. These events turned into an all our war after it had induced an outrage in all Palestinian occupied and unoccupied lands which led the Israeli army to answer back with the bombing of Ghaza for several days now, destroying infrastructure and buildings, and taking hundred of civilian lives in the process. Israel’s bombardment of the Gaza Strip continued early Saturday when an airstrike on houses in Gaza City killed tens of Palestinians — marking the highest number of fatalities in a single hit. An Israeli airstrike destroyed a high-rise building in Gaza City that housed offices of The Associated Press and other media outlets on Saturday. All AP employees and freelancers evacuated the building safely. According to the latest figures, 192 Palestinians — including 58 children — have been martyred. According to UN approximations, 10,000 Palestinians have left their homes to take refuge in UN shelters.

2. OBJECTIVES
● To highlight the Human Rights violations in Palestine
● To develop support mechanism for the young people of Palestine
● To generate more support for the Palestinian cause

3. PLATFORM FOR PARTICIPATION
This webinar will be held via video conference on Saturday, May 23 April 2021 at 4:00pm (Al-Quds Time) for 2.5 hours. Youth Alliance for Human Rights will facilitate the video conference. 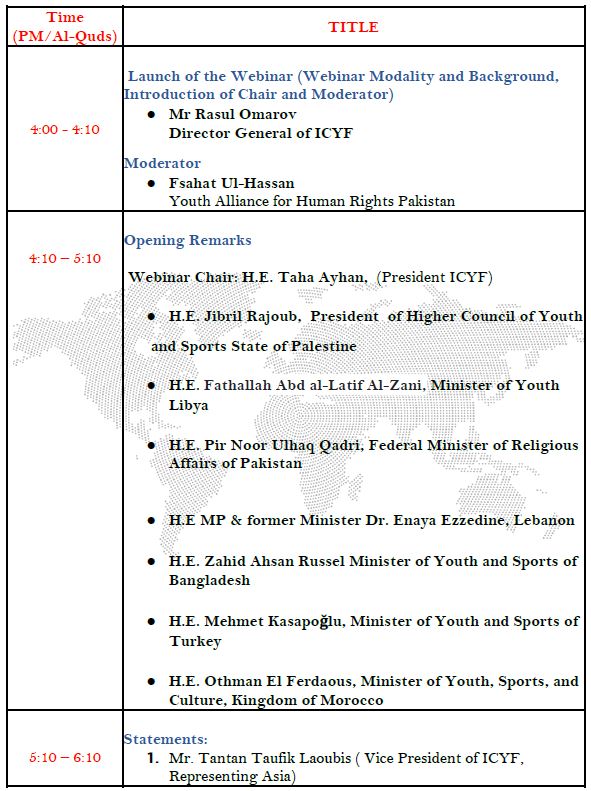 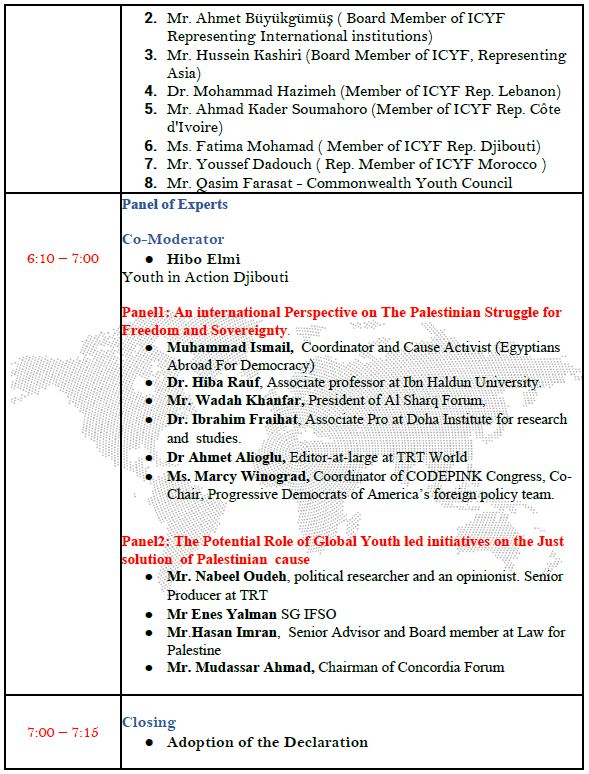