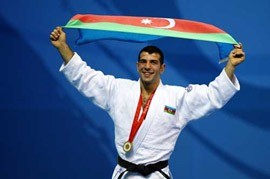 Istanbul. 15 August 2008.Azerbaijan became the first Muslim state in Beijing winning the gold medal. Elnur Mammadli from Azerbaijan needed just 13 seconds to defeat in final Wang Ki-chun from the Republic of Korea with an ippon and claim gold in Judo Men’s -73kg. In the 4th day of the Beijing 2008 Olympic Games from the OIC States Azerbaijan has one gold and two silvers, Kazakhistan one silver and one bronze, Turkey one silver, Indonesia two bronzes and Algeria, Tadjikistan and Uzbekistan one bronze.