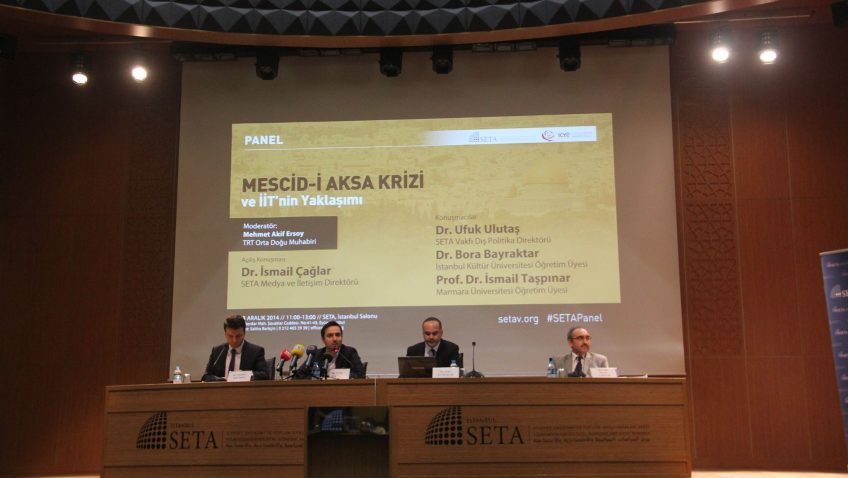 ISTANBUL. 13 December 2014. With a view of positively contributing to the OIC member states’ efforts in implementing the task of strengthening solidarity on the issue of Al-Aqsa Mosque, Islamic Cooperation Youth Forum (ICYF) in partnership with the Turkish think-tank Foundation for Political, Economic and Social Research (SETA) organized a panel on the status of Al-Aqsa Mosque in Al-Quds Al-Sharif.

The panel titled “The Crisis of Al-Aqsa and the Approach of the OIC Member States” moderated by Mehmet Akif Ersoy, the Middle-East correspondent of TRT was hosted by SETA with the contribution of Prof. Dr. Ismail Taspinar from Marmara University, Dr. Bora Bayraktar from Kultur University and Dr. Ufuk Ulutas from SETA who are all experts on the theme.

The speakers discussed the historical and political background of Al-Quds City while pointing out the dangers of deterioration of its status and the importance of it for the Israeli-Palestinian negotiations. They also called upon the member states of the OIC to take tangible actions for the freedom of Al-Aqsa underlining the probable scenerios which may come further out of the crisis.

The representatives of diplomatic missions in Turkey, NGOs, activists and journalists have attended to the panel along with wide range of youth participants from OIC countries studying in Turkey.

ICYF will release a report portraying the historical status of Al-Aqsa, the deterioration of its place and the sanctions of the member countries of the OIC in following days.